In preparation for a discussion with our high school youth group on dating, I wrote this article from the outline I made.

What does the Bible say about dating? Specifically, nothing. But, God’s word does say plenty about human relationships that we can apply to it.

Scriptural Roles of guys and girls

“Therefore a man shall leave his father and his mother and hold fast to his wife, and they shall become one flesh.” Gen. 2:24 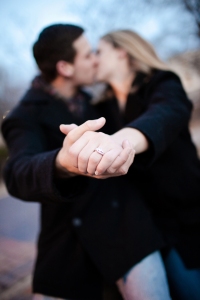 “[Jesus] answered, “Have you not read that He who created them from the beginning made them male and female, and said, ‘Therefore a man shall leave his father and his mother and hold fast to his wife, and the two shall become one flesh’? So they are no longer two but one flesh. What therefore God has joined together, let not man separate.” Matt. 19:4-6

While not everyone is called to the same destiny (Ephesians 4:7-13), and this includes getting married or staying single, it appears that God has intended that most people pursue marriage and have children. We know this from His command to “be fruitful and increase in number; fill the earth…” (Gen. 1:28), after which “Adam lay with his wife Eve, and she became pregnant and gave birth…” (Gen. 4:1) God says “it is not good that the man should be alone” (Gen. 2:18) and has left us with His guidelines for marriage. We are made in the image of a God who desires a relationship with us, which is probably why we desire also relationships (Gen. 1:27; 5:1; Lev. 26:12; 1 John. 4:19).

Still, we are left with choices regarding marriage and relationships, and there are various things to consider when pursuing a husband or wife, as Paul says in 1 Cor. 7:6-9: “I say this as a concession, not as a command. I wish that all of you were as I am. But each of you has your own gift from God; one has this gift, another has that. Now to the unmarried and the widows I say: It is good for them to stay unmarried, as I do. But if they cannot control themselves, they should marry, for it is better to marry than to burn with passion.”

So what does marriage have to do with dating?

Overall, not much. There is nothing about dating in the Bible because while marriage was instituted by God, dating is a relatively recent human invention, really popularized within the past couple hundred years. Dating is mostly a product of Western culture, where it is often recreational, but ultimately seen by many as a logical road to marriage. Today, we date until we find a compatible mate, then we get engaged and later marry. However in most societies, and throughout much of human history, marriages were arranged by parents and older relatives. In India, 9 out of 10 marriages are still arranged, and sometimes the bride and groom don’t meet until their wedding.

The Biblical purpose of marriage is clear: They include fulfilling our need for companionship (Gen. 2:18-25), to start families (Gen. 1:28), and to demonstrate Christ’s love for His Church (Eph. 5:22-33). Dating or courtship has no scriptural foundation or purpose, but it can have a purpose nonetheless. Almost every married couple we know dated before they were married. We may date multiple prospects, but when we find the “right” one, we marry them, and we stop dating around (hopefully!). Obviously then, we see the purpose of dating as finding the right person to marry.

This doesn’t mean that dating causes divorce, or that dating in general is a bad idea. It makes perfect sense to “try out” someone before you marry them. But obviously we are mistaken if we think that dating is a critical part of planning for a successful marriage. For thousands of years, thousands of cultures thrived without it.

How did arranged marriages succeed? I think we have a different view of marriage today. Couples depend too much on feeling love and not on doing love. When times get tough or we discover things about our spouse we don’t think we can live with, we give up. We don’t view marriage as something sacred, ordained by God, so it becomes negotiable and dispensable. Historically, our ancestors understood marriage as a real commitment, so they made it work. I’m sure there were instances of abuse and unfaithfulness that could have been avoided if partners had courted first. But for the most part, I think happy marriages moved societies forward by paying less attention to choice of mate and more attention to the choice to love, unconditionally, as the Bible calls us to do (Matt. 22:39; 1 John 3:16-17). It’s not so much who we love, but how we love.

The purpose of dating is the distinction between “dating” and “courtship.” Courtship is usually defined as dating for the purpose of finding suitable mate for marriage. Dating has a broader meaning: Two people getting together with or without regard for where it might lead.

Dating is not marriage

Now that we have connected dating to marriage, it needs to be made clear that dating IS NOT that same as marriage. Things can go horribly wrong when we pretend to be married when we are not. And it’s easy to do. We see a cute couple and we want to imitate their actions; how they touch and kiss and what they say and do together. The reality is that we are either married or not.

Playing married can lead to physical mistakes. The Bible makes it clear that sex is for marriage. God designed our bodies to have sex. He also made us with certain functions that prepare our bodies for sex. If sex is for marriage, then anything your body does in preparation for sex is for marriage also. It’s easy to think, “Hey, we are engaged, or we are getting married next week, or tomorrow. We are practically married anyway.” Practically married is not married. If we are sexually aroused and not married, we have already put ourselves in a situation where we have overstepped a God-given boundary.

Playing married, particularly in teen years, can lead to emotional disasters. Statistically, the vast majority of relationships that begin between the ages of 14 and 18 end. And if they start quickly, they usually end quickly. Even into early 20s, we are still changing as individuals and developing in maturity. In our younger years we are constantly changing and we grow in and out of friendships, and it’s unrealistic to say “forever” at that stage. In relationships, it’s easy to devote too much to the other person. The more involved we get, the easier it is to lose track of this reality. If you tell all your secrets and give your heart and soul to the other person, you are setting yourself up for a painful breakup with someone who now knows all your secrets. I’ve seen many great friendships turn into awkward and bitter situations when young people got too serious in their relationships. (Recommended reading: Datable: Are You? Are They? by Justin Lookadoo and Hayley DiMarco, http://ow.ly/5i0cK)

A frequent cycle of dating, breaking up, then dating someone else, breaking up, ad infinitum, doesn’t train us for marriage. It trains us for divorce. We are reinforcing the idea that when we tire of someone, we can simply bow out of the relationship. If dating is any kind of preparation for marriage, with a long list of ex-boyfriends or ex-girlfriends, we are more likely to become part of the divorce statistic. “I hate divorce,” God says in Malachi 2:16. We should hate it too.

When should we date?

This depends a lot on your maturity and how you view the purpose of dating. If you date solely for the purpose of having fun or gaining easier access to satisfying physical desires or emotional needs, we shouldn’t date until our outlook matures. If we understand dating as a way of seeking out a wife or husband, we are best to date in the 18-25 range. This doesn’t mean 16 year olds should never hang out. It’s just better to postpone romantic relationships until we are ready to seriously think about marriage with a mature mindset. Does this mean that teens who like each other can’t hang out? Certainly not. It’s just a good idea to keep “romance” and exclusivity in check, realizing that we are made to give ourselves completely to another person in marriage and not before. That commitment should change our approach to dating, particularly before college. I use college as a marker because it seems like this is often (not always) the period where people mature and begin to seriously weigh their future decisions. They are not changing as much and are less likely to outgrow a relationship. When you are mature enough to be seriously thinking about marriage, you are old enough to truly date.

Who should we date?

In 2 Cor. 6:14, Paul warns believers, “Do not be yoked together with unbelievers.” Two animals in the same yoke (harness) should be pulling in the same direction, otherwise they’re useless to pull a plow (this was a farming illustration Paul used). I think this applies to ANY relationship where we are deeply involved in collaboration with another person. It can apply to some business partnerships, but it clearly applies to marriage. If we are looking at dating as preparation for marriage, then it makes sense that Christians resolve not to date non-Christians. At our core, we are headed in a different direction. Walk the road with someone who is following the same Christ and His word, otherwise you will either be forced to divide at some point, or you will compromise your faith. Someone close to you in their level of spiritual maturity is also a good idea. When you’re old enough to seriously think about marriage, it’s really fairly simple: Date someone you want to marry.

How should we date?

Start by assuming that, if you are a teenager, your relationship is only temporary. If we accept this, we won’t over-invest. As an adult, date to find a mate, and look in the right places. Note the Bible’s standards for a husbands and wives (start with Proverbs—they are plentiful—and also Eph. 5 and 1 Peter 3) and look for (and BE) a good candidate. Remember that sex and anything approaching sex belongs in marriage, and don’t give away anything that you wouldn’t give to the public at large, because that’s where many of our secrets and personal details end up when our true loves become ex’s. Remember that you don’t “fall in love”. Love is a verb, and it’s more like a mountain we must be determined to climb. Since God determined early on that it was not good for us to go through life alone, understand that there is a lot more that can be accomplished together for God’s kingdom.

A couple we know experienced marital problems and nearly divorced. They are Christians, but were both wandering in their faith, putting other things and people (including other romantic interests) before each other and before God. The husband recently told me how God saved their marriage when they refocused their lives on living for Him. Separately, the wife commented, “It’s amazing how things in your life work out when you put God first.” Whether we are young or old, dating or married, the most important thing is to remember that God wants us to “have no other gods before” Him (The First Commandment in Exodus 20:3, Deut. 4:35-39). When we honor God above all others, including the object of our affection, God will honor the relationship, “so that it may go well with you and your children after you and that you may live long in the land the Lord your God gives you for all time.” (Deut. 4:40)

You are currently browsing the Dating category at God&Neighbor.