Islam ABC: Aniconism, Blasphemy, and Confusion from the Quran’s Ambiguity 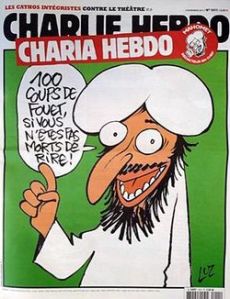 “100 lashes if you don’t die of laughter!” says this French cartoon of Muhammed.

While we recover from the recent Charlie Hebdo shooting by Muslim extremists over pictures of Muhammed considered blasphemous, there’s a lot of talk about what Islam teaches about creating images of Allah or the prophet Muhammed. There are actually two Muslim laws that come to mind here, one that prohibits the creation of images of any person or animal and one made to protect the image of Allah, Muhammad or the Qur’an. Beyond this, there is enough ambiguity in the teachings of Islam that leaves a door wide open to Muslim violence like what we just saw in Paris.

Aniconism is the Muslim prohibition of drawing, painting, weaving, carving, etc., of pictures of any sentient (non-plant) life. This is not taught in the Qur’an, but comes form the Hadith, a collection of writings, sayings and deeds of Muhammad compiled a few hundred years after his death. While there is some disagreement over the role of the Hadith among Muslims, it carries high authority in Islam, below the Qur’an, but is often used to interpret the Qur’an, and provides the basis for Sharia Law (Sharia is how is Muslims live out Islamic law in society).

The Hadith states, “The painter of these pictures will be punished on the Day of Resurrection, and it will be said to them, Make alive what you have created.’” (Bukhari, Volume 9, Book 93, No. 646-647). The exception seems to be the making of dolls for children, most likely because Muhammed married a 7 year old girl who played with dolls. The prohibition of creating (not necessarily owning) images of people and animals is very general with no specific attention to the image of Muhammad, and according the the Hadith it is an offense punished by Allah at the later “Day of Judgment”, unless the creator can bring his artwork to life. Perhaps a puppeteer or videographer might get by with this, but I would guess that stipulation is intended to expose a fraudulent creator as only God can create life.

One interesting thing about this law is that it seems to be followed by only conservative Muslims. Most Muslims have TVs, photos and artwork displaying people or animals in their homes, and Muslim history is loaded with paintings and miniatures, even some depicting Muhammed. The impetus of this law seems to be an interest in avoiding something that could become an idol.

Simply put by the well-known Muslim cleric Anjem Choundry in a recent USA Today article, “the Messenger Muhammad said, ‘Whoever insults a Prophet, kill him.'” The Qur’an states, “Who can be more wicked than one who inventeth a lie against Allah?” (Surah 6:93) and “Lo! those who malign Allah and His messenger, Allah hath cursed them in this world and the Hereafter, and hath prepared for them the doom of the disdained … Accursed, they will be seized wherever found and slain with a (fierce) slaughter.” (Surah 33:57,61) The Hadith states: “Allah’s Apostle said, ‘Who is willing to kill Ka’b bin Al-Ashraf who has hurt Allah and His Apostle?’ Thereupon Muhammad bin Maslama got up saying, ‘O Allah’s Apostle! Would you like that I kill him?’ The Prophet said, ‘Yes’…” (Bukhari, Volume 5, Book 59, No. 369)

But moderate Muslims tend to disagree with a death-to-blasphemers interpretation of the Qur’an and the Hadith, despite the fact that many Muslim countries have very harsh penalties for insulting a prophet of Islam. Hadhrat Mirza Tahir Ahmad, the fourth Khalifa of the Ahmadiyya Muslim Community, paints a more gracious view in his book Islam’s Response to Contemporary Issues: “Islam goes one step further than any other religion in granting man the freedom of speech and expression. Blasphemy is condemned on moral and ethical grounds, no doubt, but no physical punishment is prescribed for blasphemy in Islam despite the commonly held view in the contemporary world.” 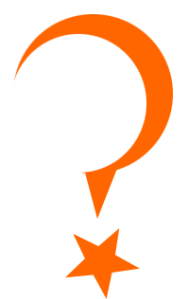 It is no secret that the Qur’an is a difficult book to read and understand, and it isn’t just a matter of reader presuppositions, but marked ambiguity. It’s literary style is fundamentally confusing. The Qur’an’s mystical, non-linear structure seems to have no beginning, middle, or end, with few breaks or markers to provide historical context. Some maintain that this literary rule-breaking amounts points to an underlying profound complexity that demonstrates its divine origin and amplifies the rewards of intense study. Many Muslims say that to truly understand the Qur’an, you must learn Arabic. One might conclude then that Allah only intended his message to be accepted by those proficient in Arabic. However, here is one testimony of a former Muslim with a university education and proficiency in Arabic who still abandoned Islam after he found the Qur’an to be nonsense.

It’s no wonder that such opposite interpretations (or Tafseer, the Arabic word for exegesis) of the Qur’an exist, i.e. “And kill [disbelievers] wherever you overtake them…”– (Surah 2:191-193). Some say these verses apply today and some say they don’t. The top tier of Muslim scholars known as the Ulama seek to provide Islamic jurisprudence, laying out the law under Sharia. But not all Muslim sects accept Ulama authority and interpretation of the Qur’an.

In any case, the Qur’an’s perplexing structure leaves NO ONE with a clear path to understanding whether these kill-the-unbeliever/blasphemer verses are description of history or prescription of behavior. I think this is a big part of the problem with Islam.

Of course there are varying interpretations of the Bible. But a straightforward reading of, for example, the wars God commanded of Israel against wicked nations in the Old Testament reveals a cultural setting and historical context that doesn’t signal believers to pattern their behavior after this. In the Qur’an, this message is muddled and confusing. And without a clear message, power-hungry or militant-minded followers are free to inject their own.

This botched restoration attempt by a well-intentioned Catholic parishioner of a century old fresco of Jesus may have earned the death penalty under Sharia.

Back to Islamic beliefs about Muhammad cartoons and other depictions of the prophet or Allah: Any image of Muhammad or any sentient being is prohibited, but this rule is seldom enforced in Islam, and the judgment belongs to Allah in the hereafter. Insult Muhammed, on the other hand, and under Sharia law it’s blasphemy with penalties that range from fines to beheading. And how do we define blasphemy? Is artwork offensive if it’s drawn poorly, or its meaning misunderstood? Serious or satire, it most certainly will offend someone, so in reality any depiction of Muhammed could be viewed as an insult to him and therefore blasphemy. You just never know.

Obviously the Islamic worldview regarding blasphemy and other out-workings of Sharia law present big problems for global society, and they have throughout the religion’s 1,400 year history. Moderate Muslims who don’t agree that capital punishment fits these crimes, or the crime of refusing to convert to Islam, are not the immediate problem. But the confusion and ambiguity of what relevant Quranic teaching means for Islam’s detractors leads to a lot of violence by many Muslims who do decide these texts call for Jihad. It isn’t a matter of just a few isolated acts by fringe groups, but by some estimates the Charlie Hebdo attack was the 24,823rd Islamic terrorist attack worldwide in the 13.3 years since 9/11. These adherents to the “honor religion” that is Islam feel duty-bound to protect their God from slander or misrepresentation. I don’t know of any other faith, including Christianity, that requires the defense of their God’s honor. (According to Psalm 18, God is OUR defender.)

Christians are required, however, to give a defense of the truth that is the Gospel of Jesus Christ and explain the hope He provides (1 Peter 3:15) that Allah does not. But we are to do this “with gentleness and respect”, not the sword. We can’t look to secular governments for the answer. The only thing that will stop the spread of militant Islam is a fundamental change of heart brought forth by the Spirit of God. To be sure, terrorism must be met with physical resistance, but the confusion and irrationality of Islam that fuels it should be met with fervent prayer and faithful witness for Christ, including sound Christian apologetics (Related posts: Three Challenges for Muslims and Sword or Peace? Debating Jesus’ Mission with a Muslim).

You are currently browsing entries tagged with ambiguity at God&Neighbor.