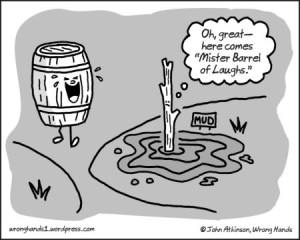 Author and New York Times columnist Charles Blow recently wrote (Religious Constriction, New York Times, June 8, 2014) that he is “both shocked and fascinated by Americans’ religious literalism.” There are a couple different worldview indicators in his article that are common in liberal circles, so I’m making two posts out of my critique. Part 1 involves Blow’s lament of Biblical literalism. He is alarmed that conservative Christians take the Bible literally, explaining, “It’s not only that Americans are more religious — Christian, in particular — but that for many, their beliefs in their religious text — the Bible, in particular — are literal.”

I wonder what skeptics who are surprised at this literalism would think if we stopped taking what they say literally. I’m guessing Blow intends for his editorial to be taken literally. If we don’t interpret his own words in their usual or most basic sense (what it means to read something literally), we could try to make him say something he didn’t intend to say, or it might not make sense at all.

What does it mean to take the Bible literally? First, we have to identify the literary style we are reading. The Bible is composed of various literary styles, or genres, including historical narrative, poetry, parables, prophecy, and personal letters. (Styles can be categorized various ways, but that’s one way to break them down.) You don’t read a poetic book like the Psalms, i.e. “Let the rivers clap their hands, let the mountains sing together for joy,” (98:8) and take that to mean literal hands emerging from the rivers, or that mountains are producing audible voices. Poetry uses illustrative language to convey a literal meaning, in this case, that creation’s grandeur serves as a proclamation of God’s greatness. The literary genre of a particular work becomes fairly evident when we read it, and that helps inform our understanding of it. We should take the Bible literally where it was intended to be taken literally, and where it is not intended to be taken literally, we shouldn’t either. Regardless of what we read, we take the meaning from it the way it was clearly intended to be taken.

If someone asks you if you take the Bible literally, it’s wise to ask exactly what they mean by “literally.” Do they understand “literal meaning” to denote that words are in strict accordance to their original meaning, in their most basic sense without metaphor or exaggeration? Or is their thinking somewhere else? To take the Bible literally is to consider that there are places where it was not intended to be taken literally, and it’s usually clear where those places are when we are reading it. And reading it—as we should read anything else—considering context, historical background, and information about the language in which it was written.

Blow is worried about the fact that “nearly a third of Americans continue to believe that the Bible ‘is the actual word of God and is to be taken literally, word for word.'” This shouldn’t be a surprise. I think most people approach a written text with the assumption that it should be taken literally, unless the text itself dictates otherwise—or there is some ulterior motive to read our own views into the text. Where there is this confusion over Biblical literalism, you will often find the fueling desire to change what Scripture says or undermine its authority, even to the point of subverting centuries-old historic understanding of Christian teaching. But the same folks who by default assume the Bible should not be taken literally generally expect their own words to be interpreted literally. Don’t be afraid to call them out on that. Then do more than just point out their inconsistency… preach. Literally.

Part 2 in this critique of Charlie Blow’s op-ed piece is up next: Get The Facts Straight: A Response to ‘Religious Constriction’, Part 2

You are currently browsing entries tagged with Biblical literalism at God&Neighbor.