Should Justice Scalia’s Convictions Surprise Us? You Be the Judge 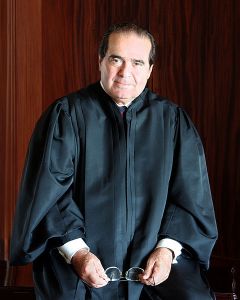 A bold worldview commitment in public figures is surprising these days. At least that’s the impression I got from a recent interview with Supreme Court Justice Antonin Scalia by New York Magazine’s Jennifer Senior. Scalia is a committed Catholic and Senior is an Atheist (how committed is uncertain).

Early in the interview the 27-year conservative judge talks about his ‘originalist’ approach to finding meaning in the U.S. Constitution. Originalism is “the belief that the United States Constitution should be interpreted in the way the authors originally intended it.”

Interviewer: Had you already arrived at originalism as a philosophy?

Scalia: I don’t know when I came to that view. I’ve always had it, as far as I know. Words have meaning. And their meaning doesn’t change. I mean, the notion that the Constitution should simply, by decree of the Court, mean something that it didn’t mean when the people voted for it—frankly, you should ask the other side the question! How did they ever get there?

Interviewer: But as law students, they were taught that the Constitution evolved, right? You got that same message consistently in class, yet you had other ideas.

Scalia: I am something of a contrarian, I suppose. I feel less comfortable when everybody agrees with me. I say, “I better reexamine my position!” I probably believe that the worst opinions in my court have been unanimous. Because there’s nobody on the other side pointing out all the flaws.

Interviewer: Really? So if you had the chance to have eight other justices just like you, would you not want them to be your colleagues?

Interviewer: That was a serious question!

Scalia: What I do wish is that we were in agreement on the basic question of what we think we’re doing when we interpret the Constitution. I mean, that’s sort of rudimentary. It’s sort of an embarrassment, really, that we’re not. But some people think our job is to keep it up to date, give new meaning to whatever phrases it has. And others think it’s to give it the meaning the people ratified when they adopted it. Those are quite different views.

Christians can relate to the common principal of the two: seeking the original intent of the author. Modern liberalism embraces relativism, attempting to operate on the self-defeating principal that there are no immutable principals. If we are going to say the Constitution has authority, we can’t interpret based on the intent of the interpreters over and against the authors, unless through ratification we become additional authors. Some may want to ratify Scripture, but the best that can be done is to disregard its authority. Actually, that’s the worst thing we can do (Genesis 3), but a secularized society is surprised when people like Scalia show a regard for authority and truth, and that meaning matters.

THE POPE’S COMMENTS ON DIVISIVE ISSUES

Interviewer: I’m not inviting you to run down the pope. But what do you think of his recent comments, that the church ought to focus less on divisive issues and more on helping the poor?

Scalia: I think he’s absolutely right. I think the church ought to be more evangelistic.

Interviewer: But he also wanted to steer its emphasis away from homosexuality and abortion.

Scalia: Yeah. But he hasn’t backed off the view of the church on those issues. He’s just saying, “Don’t spend all our time talking about that stuff. Talk about Jesus Christ and evangelize.” I think there’s no indication whatever that he’s changing doctrinally.

I spent my junior year in Switzerland. On the way back home, I spent some time in England, and I remember going to Hyde Park Corner. And there was a Roman Catholic priest in his collar, standing on a soapbox, preaching the Catholic faith and being heckled by a group. And I thought, My goodness. I thought that was admirable. I have often bemoaned the fact that the Catholic church has sort of lost that evangelistic spirit. And if this pope brings it back, all the better.

Interviewer: The one thing I did think, as he said those somewhat welcoming things to gay men and women, is, ‘Huh, this really does show how much our world has changed.’ I was wondering what kind of personal exposure you might have had to this sea change.

Scalia: I have friends that I know, or very much suspect, are homosexual. Everybody does.

Interviewer: Have any of them come out to you?

Interviewer: Has your personal attitude softened some [toward homosexuality]?

Scalia: I don’t think I’ve softened. I don’t know what you mean by softened.

Interviewer: If you talk to your grandchildren, they have different opinions from you about this, right?

Scalia: I don’t know about my grandchildren. I know about my children. I don’t think they and I differ very much. But I’m not a hater of homosexuals at all. I still think it’s Catholic teaching that it’s wrong. Okay? But I don’t hate the people that engage in it. In my legal opinions, all I’ve said is that I don’t think the Constitution requires the people to adopt one view or the other.

Interviewer: There was something different about your DOMA opinion, I thought. It was really pungent, yes, but you seemed more focused on your colleagues’ jurisprudence. You didn’t talk about a gay lobby, or about the fact that people have the right to determine what they consider moral. In Lawrence v. Texas, you said Americans were within their rights in “protecting themselves and their families from a lifestyle that they believe to be immoral and destructive.”

Scalia: I would write that again. But that’s not saying that I personally think it’s destructive. Americans have a right to feel that way. They have a democratic right to do that, and if it is to change, it should change democratically, and not at the ukase [a mandate or decree] of a Supreme Court.

Interviewer: Whatever you think of the opinion, Justice ­Kennedy is now the Thurgood Marshall of gay rights.

Interviewer: I don’t know how, by your lights, that’s going to be regarded in 50 years.

Scalia: I don’t know either. And, frankly, I don’t care. Maybe the world is spinning toward a wider acceptance of homosexual rights, and here’s Scalia, standing athwart it. At least standing athwart it is a constitutional entitlement. But I have never been custodian of my legacy. When I’m dead and gone, I’ll either be sublimely happy or terribly unhappy.

With refreshing clarity, Scalia rightly reflects a Biblical view of homosexuality, separating the sin from the sinner, as well as that of the current law of the land: American citizens are not constitutionally obligated to accept homosexuality as normal. He is unashamed and unapologetic of this view, which is as he points out is nothing new in what the pope or his catholic church teaches. Popular opinion and the current “sea change” won’t change his conviction of unchanging truth.

HEAVEN, HELL, THE DEVIL AND JESUS

Interviewer: You believe in heaven and hell?

Scalia: Oh, of course I do. Don’t you believe in heaven and hell?

Interviewer: Does that mean I’m not going?

Interviewer: Wait, to heaven or hell?

Scalia: It doesn’t mean you’re not going to hell, just because you don’t believe in it. That’s Catholic doctrine! Everyone is going one place or the other.

Interviewer: But you don’t have to be a Catholic to get into heaven? Or believe in it?

Scalia: Of course not!

Scalia: I don’t know where you’re going. I don’t even know whether Judas Iscariot is in hell. I mean, that’s what the pope meant when he said, “Who am I to judge?” He may have recanted and had severe penance just before he died. Who knows?

Interviewer: Can we talk about your drafting process—

Scalia: [Leans in, stage-whispers.] I even believe in the Devil.

Interviewer: Every Catholic believes this? There’s a wide variety of Catholics out there …

Scalia: If you are faithful to Catholic dogma, that is certainly a large part of it.

Interviewer: Have you seen evidence of the Devil lately?

Scalia: You know, it is curious. In the Gospels, the Devil is doing all sorts of things. He’s making pigs run off cliffs, he’s possessing people and whatnot. And that doesn’t happen very much anymore.

Interviewer: So what’s he doing now?

Scalia: What he’s doing now is getting people not to believe in him or in God. He’s much more successful that way.

Interviewer: That has really painful implications for atheists. Are you sure that’s the ­Devil’s work?

Scalia: I didn’t say atheists are the Devil’s work.

Interviewer: Well, you’re saying the Devil is ­persuading people to not believe in God. Couldn’t there be other reasons to not believe?

Interviewer: Isn’t it terribly frightening to believe in the Devil?

Interviewer: I hope you weren’t sensing contempt from me. It wasn’t your belief that surprised me so much as how boldly you expressed it.

Religion aside (if that’s possible), even conservatism implies that there us something in our convictions worth conserving. Even progressives are conservative in this way. Here we have a Supreme Court judge frankly talking theology, and nothing new and groundbreaking at that. Scalia implies that “mainstream America” believes in the Devil, but I think that depends on which mainstream America he means. Regardless, he is relaying simple, historic Christianity. Truthfully speaking your worldview is certainly permitted and particularly Constitutional. But it’s just that kind of boldness, spoken not only on Sundays, but in the context of Scalia’s career, that Secularism finds surprising and weird.

That may be the thing about Christian worldview conviction that surprises atheists the most. From a secular viewpoint, religion is something that ought to be compartmentalized to one area of your life, if you choose to be religious at all. But committed believers like Justice Scalia and other committed believers don’t relegate religion to church on Sunday or the confines of their family gatherings. We see his candid religious honesty and boldness on the job. And not just any job, but in a very high-profile public position with the United States government, a place many feel should above all be bereft of religiosity. Scalia living out his faith in public shocks Secularists. This reveals Secularism itself as a religion, one that is practiced seven days a week by it’s devoted adherents. No doubt, if worldview matters, we will carry it with us wherever we go.

You are currently browsing entries tagged with hell at God&Neighbor.