The Shack Book Review and Why Its Theology Matters 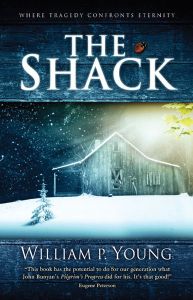 The Shack begins as a suspenseful tale of the disappearance and presumed murder of Mack’s daughter, and slows down a bit as the story focuses on its central event, Mack’s weekend with God in a sort of parallel dimension. This is a surreal experience interacting with all three Persons of the Trinity as separate human (more or less) forms, preparing him for life back in the real world, particularly with his family and forgiving his daughter’s killer.

I enjoyed the story overall, but The Shack falls short in its theological message. I realize that fiction really doesn’t carry a message that is intended to be applied to the life of the reader, but The Shack does, and as such shouldn’t be dismissed. The author himself clearly doesn’t want its message to be dismissed.

The book quite obviously makes certain truth claims applicable to the reality of the reader. The endorsements on the back cover and first 3 pages clearly state the case that it will “change the way you think about God”. On the last page the author encourages further action if the reader is “taken with the message as we are” by this “magnificent glimpse into the nature of God” and directs us to TheShackBook.com to engage in discussion forums. The web site’s FAQ defends the book’s theological ideas as art: “As Christians, we need to come back to the whole truth–truth which is both rational and artistic. von Balthasar warns that the church has sacrificed beauty for exactness and in so doing it has lost an important element of the truth. He calls the church to break through a rational, propositional, exact view of God ‘in order to bring the truth of the whole into view again–truth as a transcendental property of Being, truth which is no abstraction'”.

In the case of The Shack, “exactness”, or truth, which is absolute, is often sacrificed for beauty in the name of art. Art and beauty have their place for sure. Art by common definition is subjective; theological truths are objective. The beauty and creativity in The Shack’s imagery and dialog is art. It’s message asserts theology, so at least that aspect of the book cannot be viewed as art.

If the author’s view of the Bible is that it is the ultimate authority, then any truth he asserts theologically ought to be reconcilable with it. The theology that The Shack asserts unfortunately falls short and contradicts the Bible in some distorted views of the character and attributes of God, the Trinity and salvation (i.e. John 14:6 says Jesus is “the way” to the Father, whereas The Shack says Jesus is merely “the best way to relate to the Father”, chapter 7). I won’t hash out the multiple specific problems here, but there are some who have quite thoroughly, such as reviews by Ben Mathew in Emmaus Bible College’s Journey Magazine and Norman Geisler at Bastion Books.

As stated, I did enjoy the story of The Shack, and I appreciated the insights on forgiveness near the end. The problems arise when it comes in contrast with what the Bible teaches and steps outside the boundaries of fiction to teach its own ideas. One thing The Shack urges us to do is to dispel our preconceived notions about religion and God, which can be a good thing if our earlier notions were not faithfully informed by Scripture. Unfortunately, it’s the Biblical description of God that The Shack encourages us to dispel. It’s a few better endeavor to use God’s Word to discern the “whole truth” of Christian theology rather than a fiction novel. The truth matters, and “if anything matters, then everything matters.” (p. 250)

You are currently browsing entries tagged with Trinity at God&Neighbor.