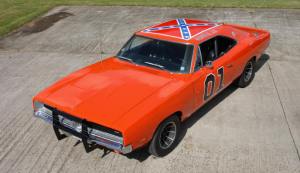 Remember the General Lee? I spent too much of my grade school years watching The Dukes of Hazzard on CBS, which you probably know is about the antics of those Duke boys, a tiny but tubby crooked county commissioner, and other country hick-ish characters in fictional rural Hazzard County, Georgia. Well, it was really about the cool car. The General Lee was a customized ’69 Dodge Charger stock car detailed with a large confederate flag emblazoned on the roof.

Because of this show, my understanding of the confederate flag growing up was simply as an icon of southern pride, banjo music, NASCAR, and all that good ol’ stuff portrayed on the show. While I watched The General race around the country, I never thought about the racism in our country it helped to communicate. Even as an adult, after learning of the confederate flag’s origin during America’s Civil War, it never was for me a representation of the Southern States’ desire to keep slaves, which was of course one of the two questions the war resolved (the other being states’ rights). Of course, I was raised in a white middle class family in the midwest, and my ignorance about this was probably pretty common.

Currently, a “confederate flag” news search on the internet yields pages of stories about controversy over the uses, personal or official, of the flag that linger today in some southern states. A recent incident at the high school down the street (we live in Iowa, which many non-Iowans rightly recognize as not a southern state) made me see with a new light that many people still associate the confederate flag with our nation’s sad history with slavery and slavery’s root in racism. In the school, 3 fights broke out in one day over a Facebook selfie that included a confederate flag in the background. Some of the students offended and affected by that controversy were kids, both black and white, that also came to our church youth group, so I tried to pay attention. Obviously, people will see completely different things when they see a confederate flag. For too long I saw only stuff like cowboy boots and Gettysburg re-enactments (and of course the General Lee).

While our past national affinity for racism and slavery has been for the most part dealt with, it still lingers, like the remnants of every other sin that has had its hey-day. We can’t put our racist history to rest where it still pervades parts of the culture. 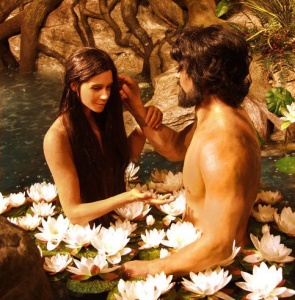 Racism is a problem in large part because of our thinking about the concept of race. From a Biblical perspective, there is only one race. All human beings are made in the image of God and are descendants of Adam and Eve (who can hardly be found depicted as anything other than a white couple—they were most likely a middle brown). We read about this racial singularity in Genesis chapter 1. By chapter 3, they both had sinned, and it wasn’t long before the sin of racism was conceived. That wasn’t part of the original plan, and it doesn’t make sense scientifically or rationally. There are no differences in the human genome that provide a basis for hierarchical ethnicity, no taxonomic distinction that says we should categorize people that way. Races are mankind’s invention and frankly classifications the Imago Dei can do without. We are all human beings. And we are all sinners, for “all have sinned and fallen short of the glory of God.” (Romans 3:23) We have more in common than we might care to admit.

But doesn’t the Bible condone racism and slavery just as much as the South did? In short, no. This is a complex topic, but I’ll try to refute this briefly with two points.

First, there various definitions and different models of slavery, so we need to have a clear idea of what we’re talking about when we use the term. The type of Ancient Near East slavery most often seen in Scripture is closer to our idea of indentured servitude rather than the chattel slavery we most readily think of modeled in the New World (i.e. the African Slave Trade). Most servants entered the arrangement by choice in order to pay off a debt they couldn’t handle financially. At the same time, slaves in the Bible were generally considered property. Many people were forced into slavery, sometimes as a more favorable option over killing enemies captured in war, and sometimes in outright abuse.

Second, as in any other true account of history, the Bible records sinfulness. Nowhere in the Bible do we see God creating or condoning slavery, and it was clearly not the ideal. In fact, forcibly capturing innocent people and selling them was actually forbidden by God (Exodus 21:16) and harming or killing servants was likewise severely punishable under Hebrew law. God has tolerated various forms of slavery, as He does with a great number of sins, as an accommodation for sinful people who were bent on going our own way. God’s sovereignty and justice often comes as His leaving us to see our own consequences for our actions. This is often a kinder judgment. Where man insisted on making his neighbor his property, God regulated the practice for their protection.

People owning people was never a part of God’s good creation. In fact, the overarching message of the Bible is an invitation to freedom from sin that is described as slavery (See Romans 6). We see some examples of slavery in the Old Testament, but there is an entire book called Exodus describing God’s abolition of an entire nation held in bondage to Egypt for centuries. Paul reminds the church in Ephesians 5 to treat slaves with respect (Ephesians 6:5-9), so slavery was still a cultural reality in the New Testament. But Paul’s gospel message to all was that it was “for freedom that Christ has set us free. Stand firm, then, and do not let yourselves be burdened again by a yoke of slavery.” (Galatians 5:1) The alignments of God’s Word is clearly against the concept of slavery, not for it.

The Transatlantic Slave Trade from the 16th to the 19th centuries represents the development of slavery to an intolerable level. You might say God finally did to a large degree judge and eliminate slavery, as it was for the most part abolitionists like William Wilberforce and Abraham Lincoln, guided by Christian principals and the Imago Dei, who led the charge. Wilberforce wrote, “So enormous, so dreadful, so irremediable did the Trade’s wickedness appear that my own mind was completely made up for abolition.” Lincoln too thought it self-evident that “all men are created equal” and on this Biblical truth initiated an end to slavery in America that followed the Civil War. He concluded, “…he who would be no slave, must consent to have no slave. Those who deny freedom to others, deserve it not for themselves; and, under a just God, can not long retain it.”

The confederate flag or “southern pride” should have never been symbols of racism because racism should never have existed. The apostle Paul made it clear that in God’s kingdom there is no room for it. On racism, sexism, or supremacism for that matter, “There is neither Jew nor Greek, there is neither slave nor free, there is no male and female, for you are all one in Christ Jesus.” (Galatians 3:28) We won’t see the complete end of racism on this side of eternity. Only then will every knee bow and accept the truth about who we are. Looking back to creation, we can see we are one race. Before we began enslaving each other, we fell and were enslaved to sin itself. Looking back to the sacrifice of God’s own Son for our sin on the cross brings full circle the freedom and redemption and oneness we have in Christ. “For He Himself is our peace, who has made us both one and has broken down in His flesh the dividing wall of hostility.” (Ephesians 2:14) Amen?

§ 16 Responses to Why Racism Shouldn’t Exist

You are currently reading Why Racism Shouldn’t Exist at God&Neighbor.