Sunday School at the GRAMMY Awards

Most religious lessons happen Sunday morning, but quite a bit of theology was on display Sunday night at the Grammy Awards. 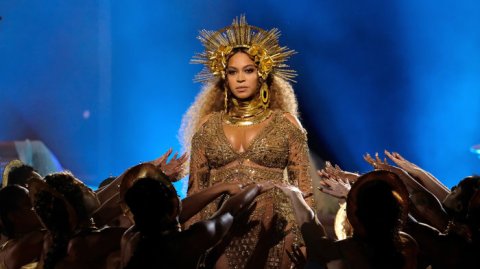 The most notable performance of the night was from Beyoncé, which the Washington Post explains(1) was inspired by African, Hindu and Roman goddesses, and possibly the Virgin Mary, noting that “Beyoncé was teaching.” What is she teaching? The deities portrayed “signified womanhood” and love and fertility (Beyoncé is pregnant with twins) and represent an eclectic sampling of various religious beliefs. None were specifically sung about, but hinted at through costume and visuals that few understood until later analysis. Still, the Post reports, “It was described as ‘ethereal,’ a ‘sci-fi fertility ritual’ and just plain ‘weird’.”

It’s nice to see pregnancy portrayed as a blessing as it’s so often portrayed as a curse in today’s culture, but what other picture of the culture can we see in the theological lessons of the Grammys? Alongside the confusing nods to multiple pagan gods, there was a clear declaration of one God in particular. In the somewhat less popular performance by Chance The Rapper, we heard “the type of worship make Jesus come back a day early… Name above all names, He’s worthy of all praise… My voice belongs to You…” As reported in the Christian Post, Chance the Rapper “was joined by Kirk Franklin, Francis and the Lights, and Tamela Mann for a gospel performance of Coloring Book’s ‘How Great’ and ‘All We Got.'”(2) A video of his performance can be found here.(3)

One thing is clear from the Grammys, and that is that we are persistently spiritual people. In this world, bold declarations of truth often get lost in the barrage of confused portrayals of who God really is. The apostle Paul faced the same confusion in first century Mars Hill:

“Men of Athens! I see that you are extremely religious in every respect. For as I was passing through and observing the objects of your worship, I even found an altar on which was inscribed: TO AN UNKNOWN GOD. Therefore, what you worship in ignorance, this I proclaim to you. The God who made the world and everything in it—He is Lord of heaven and earth and does not live in shrines made by hands. Neither is He served by human hands, as though He needed anything, since He Himself gives everyone life and breath and all things. From one man He has made every nationality to live over the whole earth and has determined their appointed times and the boundaries of where they live. He did this so they might seek God, and perhaps they might reach out and find Him, though He is not far from each one of us. For in Him we live and move and exist, as even some of your own poets have said, ‘For we are also His offspring.’ Being God’s offspring then, we shouldn’t think that the divine nature is like gold or silver or stone, an image fashioned by human art and imagination.” (Acts 17:22-29)

You are currently reading Sunday School at the GRAMMY Awards at God&Neighbor.