Why the Bible Is and Is Not a Science Book

I think the claim that “the Bible is not a science book” is generally true, but I think it depends on what we mean when we say science book. 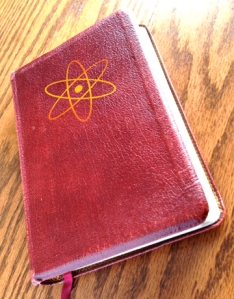 Typically, a science book that is used to teach students science is dedicated cover to cover to teaching science. In this sense the Bible is not a science book because it’s not dedicated cover to cover to teaching science. The setting of the Bible spans from the creation of the universe to a future age, and in the main teaches the story of God’s redemption of mankind in the form of law, history, poetry, prophesy, wisdom, the message of the Gospels and letters of instruction for Christian living. This is not what we refer to as scientific instruction.

On the other hand, to say that the Bible at no point teaches on matters related to science is not true. The Bible does make mention of certain processes and conditions in nature, but when it does, it is in a context that isn’t specifically scientific. But the way in which we understand and study those same processes and conditions today is primarily in the realm of modern science.

For example, the hydrologic cycle (the continuous pathway water takes including rain, water flow, evaporation, condensation, then rain again) is something meteorologists are keenly aware of and most of us learn in science class. But, this process is also described in numerous passages in Scripture. Here are a few, from the NASB:

He causes the vapors to ascend from the ends of the earth; Who makes lightnings for the rain, Who brings forth the wind from His treasuries.
(Psalm 135:7)

He wraps up the waters in His clouds, and the cloud does not burst under them.
(Job 26:8)

This isn’t to say that scientists began their inquiry from these passages. Discovery of these principals and subsequent development of theories can happen independently from the Bible. But the fact that these ancient and divinely inspired observations of God’s natural order predate the majority of man’s scientific knowledge speaks to God’s ultimate authorship and authority in Scripture.

It also helps to eliminate the false dichotomy of science and scripture. After all, without the God described in the Bible, we would not have science. The process of doing science rests on the laws of logic, and logic is rooted in the nature of God.

I agree that in one sense the Bible is not a science textbook in its prime intent, but that isn’t cause to disregard it when it mentions things we now study scientifically, or to say that the Bible has nothing to do with science. We are, after all, made to discover our Creator, and our ability to do science thousands of years ago is evident in the pages of His word.

You are currently reading Why the Bible Is and Is Not a Science Book at God&Neighbor.