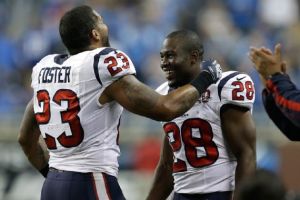 I love hearing Christian testimonies, but testimonies from those who have decided against a life of faith also have great value in Christian apologetics. ESPN published an interview with Arian Foster, running back for the Houston Texans, after he reluctantly admitted his atheism. He describes his struggle with his previous Muslim faith:

“Arian felt he was living a lie every time he knelt to pray. His prayers carried intensity only when he faced turmoil. If you can just get me out of this jam. It was meaningless and dishonest; he didn’t believe there was anything or anyone out there capable of helping him. He read the Bible and the Quran in search of evidence that would override his skepticism. The concept of an omnipotent being nagged at him. ‘Why is this relationship so one-sided? Why would a loving God create evil? Why would he allow eternal damnation?’ Foster felt like ‘a contestant in his game show.'”

Educated in Tennessee and employed by the NFL in Houston, Arian was immersed in the Bible Belt but at a critical time found himself without anyone to adequately answer his questions. Where were his Christian classmates who were “ready in season and out of season” (2 Timothy 4:2) to tell him the Biblical truth? Was there no one in his life that took 1 Peter 3:15 seriously to “always be prepared to give an answer to everyone who asks you to give the reason for the hope that you have. But do this with gentleness and respect…”?

When Arian announced his atheism, his father told him to “go find your truth.” So Arian did just that, following the path to relativism: “I’m digging deeper into myself and my truth…”

Surrounded by at least nominal Christians, Foster’s “free-thinking” found mostly passive aggressive opposition from teammates until he met the son of a preacher Justin Forsett at training camp in 2012. “They began to discuss religion, and morals, and whether one can exist without the other. Every day, it seemed, Foster presented Forsett with a different question, a new challenge. In Forsett, Foster found a friendly adversary, someone who wouldn’t cower, who could back his beliefs with both Bible verses and actions.”

(This faith-affirming quality of Christian apologetics benefits the Christian as well as anyone he’s trying to reach.)

Arian Foster says this about Forsett: “Here’s what I respect about him: Justin was never like, ‘Hey, man, you’re going to go to hell.’ He was like, ‘This is what I believe is the right way, and I’ll pray for you.’ I never feel arrogance or judgment. He never acted like he had something I don’t have. He said, ‘I would love for you to experience this,’ which is more divine than anything I’ve ever come across.”

Take time to read the full article (The Confession of Arian Foster by Tim Keown, ESPN Senior Writer) and consider: Are you pursuing friendships with unbelievers? Are you the “salt and light” in the life of someone who needs it? Christians responding to the call of apologetics should be the ones fielding the big questions, because Christianity has answers. When questions like these go unanswered, atheism often follows. Who’s Justin Forsett are you?

[Related post: Too Much Evil and Suffering in the World?]

You are currently reading Big Questions Unanswered Leads to Atheism at God&Neighbor.