Honor the Lord with Your Amygdala

The Oatmeal, an online comic by Matthew Inman, published an amusing and illuminating illustrated treatise on the “backfire effect.” This is the natural, and often sinful, cognitive bias that causes some to resist evidence contrary to their beliefs. The amygdala (the emotional core of our brains) goes into defense mode when we’re presented with “facts” we don’t like. The sin (my observation, not The Oatmeal’s) comes in when we reject ideas without utilizing our God-given reason, or when we spiral into an emotional tirade at the presenter. 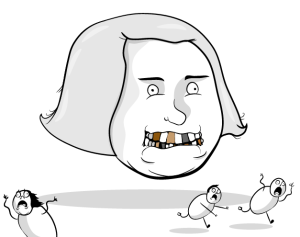 Using one of the examples in the comic, the suggestion that our beloved George Washington wore false teeth made from the teeth of slaves may illicit such a response. (There is evidence that Washington purchased teeth from slaves for false teeth, but it’s rather slim and inconclusive despite being presented here as “fact.” Or is that just my amygdala talking? You can investigate the sources cited in the comic yourself on that.)

The author says that the backfire effect “makes sense from an evolutionary perspective” and follows that up with an archetypal caveman scenario. But it also makes sense from a Biblical perspective. We are created to hold firmly to personal convictions. To believe. As fallen creatures though, we often let emotions get the best of us and set aside reason when our beliefs are challenged.

Because “we’re all going in the same direction”, the author concludes with the assurance that he’s “not here to tell you what to believe” before telling us what to believe: that it’s okay to stop, listen, and change. I’m not sure if the “change” encouraged is a change in how we respond—now that we know how our brains often handle new and unwanted information—or a change in our worldview when presented with new ideas about the world or ourselves. Both are good and healthy responses, the latter depending of course on the ideas.

In any case, the only reason to believe anything at all is if we are convinced that it’s true. This includes foundational or presuppositional beliefs, like the existence of God, or the tenets of naturalism, that we ultimately must accept or reject on faith.

The overall aim of his post about belief seems to be the awareness of what’s going on when we learn new things, and realization that we don’t have to blow up at others who challenge our deeply held beliefs. Atheism and sarcasm aside, that’s an earnest and respectable goal. 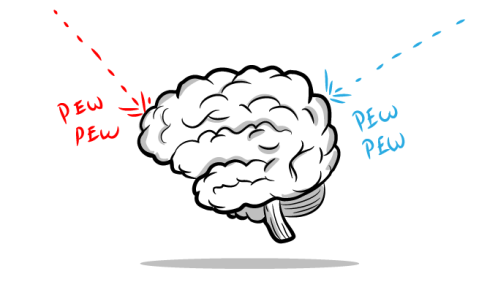 Sometimes the truth hurts. But the truth is meant to ultimately give us joy. The good news of the gospel—that Jesus Christ died to save sinners—begins with the bad news that we all are sinners who need a savior. There’s a classic example of new information that many an amygdala reject (1 John 1:9-10).

We should keep an open mind, even about our deeper convictions. But as G.K. Chesterton tells it, “Merely having an open mind is nothing. The object of opening the mind, as of opening the mouth, is to shut it again on something solid. Otherwise, it could end up like a city sewer, rejecting nothing.”

(The “classroom-friendly version” of The Oatmeal comic is linked above, but there is a “regular version” with some profanity that really isn’t a necessary or funnier way to make the point.)

§ 15 Responses to Honor the Lord with Your Amygdala

You are currently reading Honor the Lord with Your Amygdala at God&Neighbor.