Pro-Abortion, Pro-life and the Importance of Consistency

A recent post, Fetal Personhood and Criminalizing Abortion: A Prosecutor’s Perspective, was written by a criminal prosecutor who feels she has a unique perspective on abortion, and indeed she does. In particular she exposes the inconsistency in many pro-life claims and the difficulty of prosecuting parents if abortion were criminalized. For the most part, I agree with those sentiments.

She says that “an abortion ban that leaves exceptions in place only for instances of rape, incest or life of the mother” is in essence “a pro-choice position.” This is technically true. In the classic exception “hard cases” that many pro-lifers concede, there is a choice to be made where death will result. 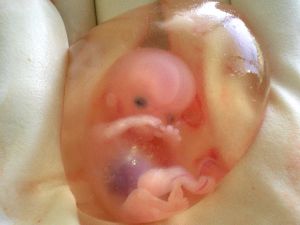 I agree with the author that exceptions made in the cases of rape and incest do not morally belong in a pro-life position. A pro-life position is concerned with the preservation of life, and such an accommodation is inconsistent if it considers the circumstances that led to the unwanted pregnancy. Regardless of the intentions of the parents, the child is innocent of any civil crime deserving death.

“…if you actually believe that a zygote is a person, then how can you demand anything less than justice for the murder victim?”  Exactly.

The only possible exception I can see to prohibiting abortion is a case where the mother’s life is genuinely in danger if the pregnancy carries to term. This is a choice made when there is no available choice to save a life. Tragically, someone dies regardless.

The only upside to these cases are that they are extremely rare. Put together, these hard cases account for less than 1% of all abortions. Over 99% of all abortions are basically a form of birth control.

Convenience has always been a factor in abortion. It would be ignorant to say it’s an easy decision, but it’s seen as a choice that ultimately eases a burden. This leads to the other point the author makes: If abortion were outlawed with the exception of the hard cases, it would cause an “unequivocally impossible enforcement situation.” How would we easily determine if those situations apply?

“…how does a woman who qualifies for one of these exceptions go about availing herself of the exception? Are we going to take the pregnant woman’s word for it that she was raped (somehow I suspect that the answer to this question will be “no”)? Is there going to be a form that she has to fill out? Will she be placed under oath? Will there be post-abortion investigations by the police to ensure that she was truthful when she said that she was raped? If we aren’t going to just take her word for it, what will be the mechanism for fact finding we will use?”

These are a small portion of the potential complexities the author ponders. Her focus is clearly on how inconvenient and impractical it would seem to enforce a law prohibiting abortion with the hard case exceptions. A consistent pro-life position asserts that abortion is murder, and any difficulty in dealing with murderers should come secondary to the axiom that we need to deal with murderers, despite the impractical nature of some rare cases. We don’t overlook murder because it’s hard to prosecute. The difficulty would come from criminalizing something that should have never been legal in the first place—of course that will cause a rift. But this is where we start to see the internal inconsistency in abortion logic.

What’s more, something of a genetic fallacy shows up in her discomfort in the opinions of those who are neither women nor pregnant.

“I am more than a little bit uncomfortable about being legally mandated to prosecute other women because they have terminated a pregnancy when it is a bunch of non-pregnant people – many of whom are men who can’t even become pregnant – who don’t think her reason was ‘good enough’ to be ‘legal’.”

If something is morally wrong, the gender or experience of those challenging abortion doesn’t change the truth of the matter. Obviously this is an obstacle for the author.

Even without dealing with exceptions, I suspect the author wishes never to have to prosecute any kind of abortion. She doesn’t view abortion as morally wrong. This criminal prosecutor recognizes that to identify murderers of adults and ignore murderers of the unborn would be inconsistent, so this is the obvious solution to the dilemma. And this is managed in the usual pro-abortion fashion of denying the personhood of a developing child in the womb. Interestingly, we call it a baby or son or daughter when we want it and a fetus or zygote or “cluster of cells” when we don’t. A proud expectant mother doesn’t joyously declare, “We’re having a fetus!”

Truly, if personhood doesn’t begin at conception, when does it begin? Theories about various stages of pregnancy abound—implantation, segmentation, brain function, fetal viability—even the ridiculous idea that the moment of birth signals the magical entrance of humanity, when the baby finally exits the birth canal into open air. On the fringe, some extremists like Peter Singer suggest personhood is established long after birth.

Regardless, the concession of most pro-abortionists is that the beginning of personhood is still up for debate, while at the same time they adamantly assert that killing a fetus at almost any point during the pregnancy is an acceptable choice. If we haven’t settled on when life becomes valuable, how can we be settled that abortion is right? This is the grand moral inconsistently and the absurdity of abortion.

Christians know from the internally consistent Word of God that all human life, created in the image of the Creator (Genesis 1:27) , has inherent value, regardless of the cause or circumstances surrounding pregnancy.

“For You formed my inward parts; You covered me in my mother’s womb. I will praise You, for I am fearfully and wonderfully made; marvelous are Your works and that my soul knows well. My frame was not hidden from You, when I was made in secret, and skillfully wrought in the lowest parts of the earth. Your eyes saw my substance, being yet unformed, and in Your book they all were written, the days fashioned for me, when as yet there were none of them.” (Psalm 139:13-16; See also Jeremiah 1:5, Luke 1:41,44, Galatians 1:15, and Ephesians 1:3,4)

There is an “us” before birth, and there is a plan for us long before we arrive. While medical science grapples with the mysteries of life’s origin, our God-given sense of morality (Romans 2:15) testifies that the pre-born are already more than just a “cluster of cells.” Many who convince themselves otherwise are willing to trade this knowledge for the convenience of abortion. The inconsistency is ignored, along with the sanctity of life in the most helpless among us.

Pro-lifers, be consistent in your convictions. Don’t embrace exceptions that may allow rapists to go to jail, but also allow killers to go free, and condemn the innocent to death without a trial. And love your neighbor from conception to the end of their natural life, praying that the span between the two isn’t cut short by abortion.

[Related post: Celebrating Roe v Wade’s Anniversary (or Why Hardly Anyone Is)]

§ 15 Responses to Pro-Abortion, Pro-life and the Importance of Consistency

Leave a Reply to Jam One Cancel reply

You are currently reading Pro-Abortion, Pro-life and the Importance of Consistency at God&Neighbor.